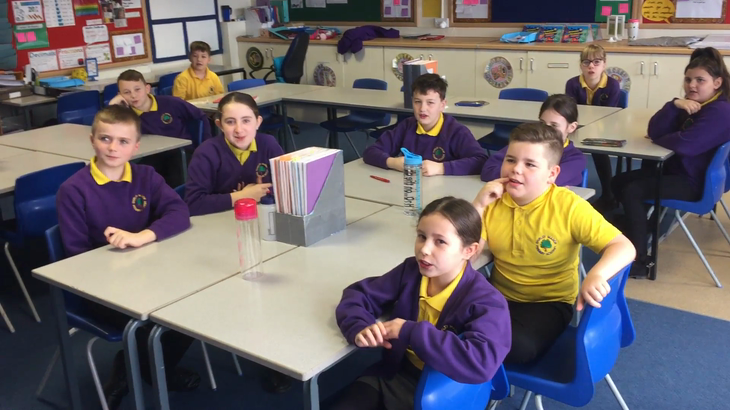 Year 5 have entered the BBC 500 words competition. Here is one of the entries.

Halloween evening approached, as the man, who loved to decorate his famous Halloween cookies, started baking this year’s batch. His home was a whitewashed block, with broken windows; a great, brown door with a broken handle and vines creeping all over the crumbling roof.

As the day passed by, he had some trick or treaters visit the house. One came with an awesome costume. He was dressed like Humaphu, one of the Hero Twins. The man explained that his treats were not yet ready, but if they came back later, he would give them some.

The hero twin then decided to play a trick on the man. They mixed together a monkey tail, black hawks, puss and blood, to make a potion which would make the famous cookies come to life.  As the old man went into his house, the tricksters decided to unleash their potion. They poured it into a bag and slowly, snuck the bag in through the open window of the kitchen.

As fast as lightning, the potion took hold and started filling the room with a magical mist; covering all of the Halloween cookies with the potion. A creepy silence now fell as one by one, the cookies came alive. First, a gross cake (which was a strawberry cake) doubled in size and began exiting the kitchen, bounding onto the street. Then a jar of gummy bears toppled over. They grabbed toothpicks and charged out into the garden, like a Roman army going to war. Finally, the terrifying cookies, shaped like evil clowns, rose from the oven and ran from the house, deep into the woods.

The Twins watched as the horrific sight materialised in front of them. They suddenly, they realised that they had to get the monsters back before they destroyed the town. They quickly took a needle from their back of tricks and went to begin injecting the creatures with a potion which would return them to their treat form.

As they began trying to inject the creatures, Humaphu shouted, “They are coming after us. We need to run fast.” So they began running for their lives, sprinting through the woodland. As they ran, Humaphu tripped over a strange root that seemed to pop up out of the ground. Both brothers had forgotten about the immense pumpkin, which was now sprawling its roots through the ground and charging towards them.

After that all went black.

Both twins woke up days later, to discover that they were now surrounded by emptiness and desolation. Nothing could be seen for miles around. All the buildings were deserted and the streets were empty. They had destroyed the planet.

Humaphu slowly stood up and gazed at the emptiness and wondered, “How could I have been so stupid?”

Working with the Peace Foundation to become Peace Ambassadors

Science: Investigating the properties and changes of materials

Using the PE climbing equipment as part of multi skills

Converting between mixed and improper fractions

Creating palindromic compositions based on the work of Mason Bates

Unfortunately not the ones with chocolate chips.

Some cookies are necessary in order to make this website function correctly. These are set by default and whilst you can block or delete them by changing your browser settings, some functionality such as being able to log in to the website will not work if you do this. The necessary cookies set on this website are as follows:

Cookies that are not necessary to make the website work, but which enable additional functionality, can also be set. By default these cookies are disabled, but you can choose to enable them below: